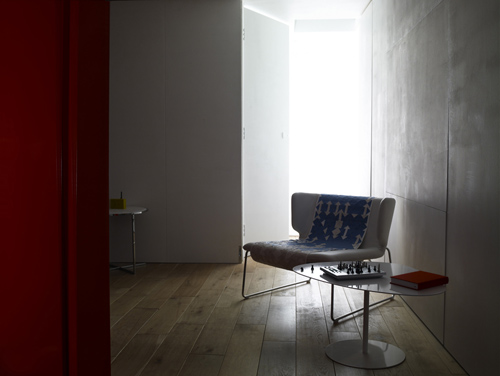 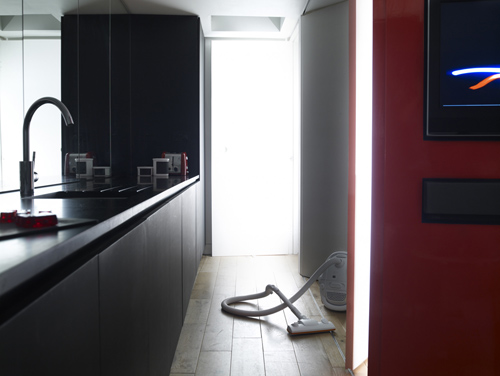 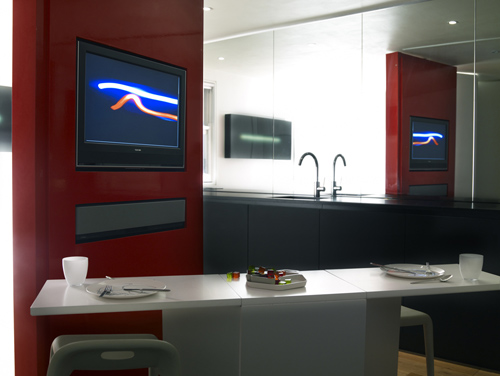 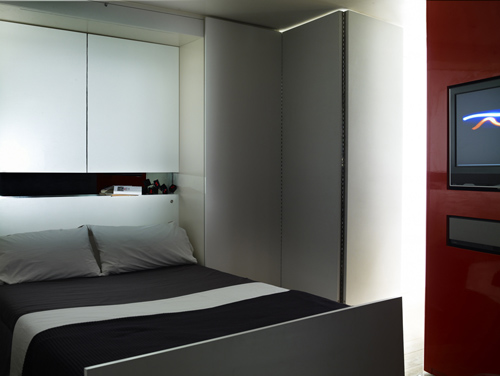 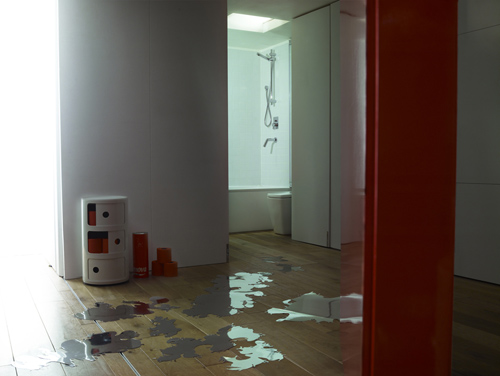 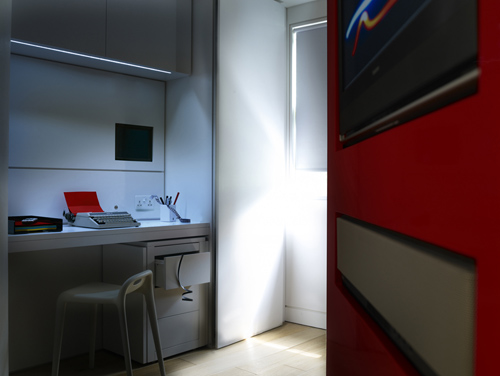 The Kinematic Apartment
Design4D have completed the refurbishment of an apartment in South East London. Film making was an important part of the ideas generating process which resulted in a layout based upon the narrative of how the client lived rather than preconceived room typologies.
The single 30sqm room consists of three basic elements. These are a red rotating media wall which can be positioned to serve any space, a solid black work surface which extends the length of the flat and a white screen wall which unfolds to reveal functions and define spaces. An automated lighting system and touch screen media centre add an extra layer of digital luxury to the apartment.
The client realised that he wanted a space where he could entertain friends, build architectural models, cook decent meals and even watch films while in the bath and that, with 30sqm, the space was going to have to be very flexible. Symbolically the hearth to the home is a red digital media centre from which he can view films while washing, work while in bed, reply to emails upon the sofa or watch television in the reflection of the mirrors while preparing a meal. The mirrors also have the advantage of doubling the perceived volume of the apartment.
From out of the flush white wall folds the bed, wardrobes and a desk with a removable storage unit/dining table. When concealed from view the floor space is enlarged to enable model making. To maximise floor space further a special convecting heater was designed by Design4D and treated as a light box artwork mounted above the sofa on the wall.
The black element in the apartment functions as the kitchen, a general work surface and a cupboard at the entrance for coats. Expressed as a monolithic object, the doors are a blackboard surface enabling notes or brainstorming to be scrawled across their surface. The worktop is a black epoxy resin from Durcon which is usually found in laboratories for its flame and chemical resisting properties.
The photoshoot was carried out by Kate Boddington who was nominated by Wallpaper magazine in 2008 as a talent to watch. Picking up on Design4D director Nik Hilton’s interest in film and the graphical look of the interior she has styled the shoot on a number of cinematic influences including Stanley Kubrick’s 2001 a Space Oddessy.