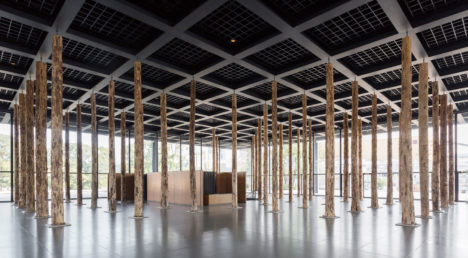 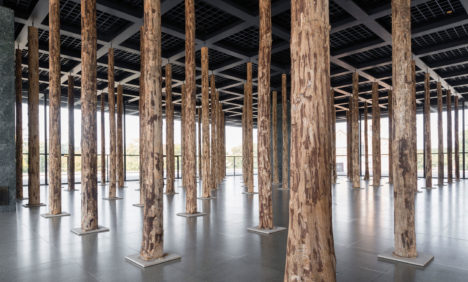 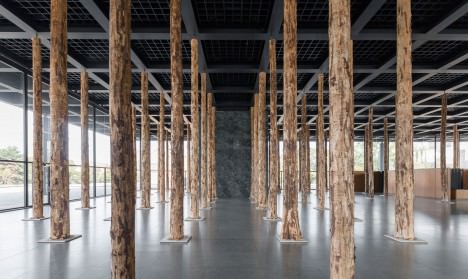 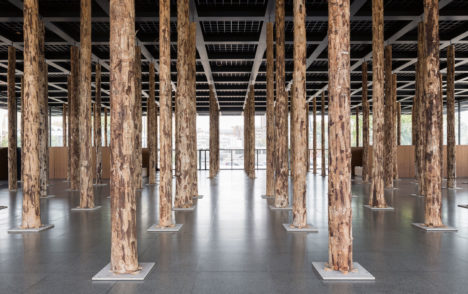 Using 144 imposing tree trunks, British architect David Chipperfield (b. in 1953) transforms the open glass hall of the museum into a densely filled hall of columns for a three-month period. The installation Sticks and Stones engages with the architecture of the Neue Nationalgalerie and simultaneously serves as a prologue to the upcoming overall renovation of the museum that David Chipperfield Architects will undertake starting in 2015.

For the title of his intervention, David Chipperfield borrowed the catchy beginning of an English children’s rhyme: “Sticks and stones [may break my bones, but words will never hurt me.]” In so doing, he points to two elements of Neue Nationalgalerie and architecture in general: columns and stone. As light-hearted as the title might seem, this last special exhibition before the closing of the institution for several years is also quite profound in its meaning.

With Sticks and Stones, Chipperfield directs attention back to the spectacular construction of the museum, erected in the years 1965 to 1968 according to the plans of Ludwig Mies van der Rohe (1886–1969). Eight narrow steel supports bear the weight of the monumental roof that seems to hover freely in the air because the supports are located far from the roof corners. The two pillar-like marble-covered installation structures inside the glass hall have no supporting function.

Like a provisional construction, the 144 barked spruce tree trunks, each ca. eight meters in length, symbolically support the weight of the roof. They fit into the clear pattern shaped by the steel roof, the granite floor, and the overall proportions of the Neue Nationalgalerie. In this way, Chipperfield’s installation allows for a new experience of space within the modernist rigor of the Mies van der Rohe design. Sticks and Stones thus pays homage to the great predecessor Mies van der Rohe while simultaneously serving as a metaphor for the upcoming construction site.

Openness and density, inside and outside, nature and technology: a field of associations is evoked that stretches far back into the history of world architecture and circles around the cultural history of the column – from the colonnades of ancient temples to the Mosque of Córdoba (8th–10th century) and Frank Lloyd Wright’s mushroom-shaped concrete columns in the Johnson Wax Building (1936–1939) to Chipperfield’s own building projects in the 21st century. David Chipperfield has made a name for himself not just with his prizewinning renovation and expansion of Berlin’s Neues Museum (1997–2009), and not in the German capital alone.

The column has been a leitmotif in his recent designs, such as the Literaturmuseum der Moderne, Marbach am Neckar (2002–2006) with its hall of slim concrete columns, or at the planned James-Simon-Galerie, the entrance building for Berlin’s Museumsinsel, with its colonnade (2007–2017), or recently at the office building One Pancras Square in London (2008–2013) with its 400 textile-patterned cast iron columns along the façade. 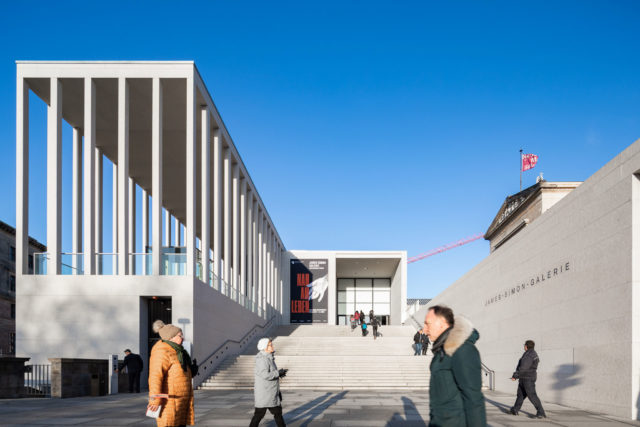 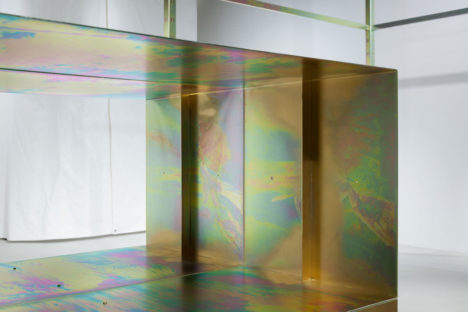 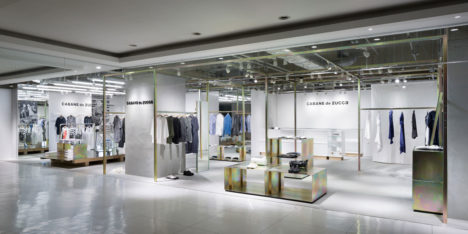 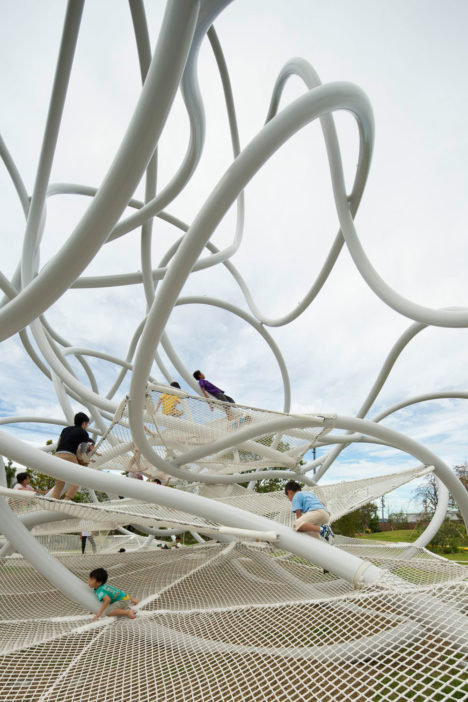